We all know money and politics go hand in hand, but how much money is really in politics?  Well, since the 2010 Citizen’s United Supreme Court case money has been given a green light into the arena.  To find out just how much money is being thrown around, let’s consider the current presidential election (including primaries).

CNNMoney recently ran an article on the top 9 contributors to Super PACs.  The first 8 of these were conservative leaning, while the final was liberal.  The list, with their estimated contributions as of the end of June:

Okay, so we know Citizens United opened the doors for big spenders through Super PACS, but how much influence do these groups truly have?

$204 million…that’s a lot of cash.  Super PACs represent  about 77% of the total.  Even under the assumption of equal spending between all 680 registered groups this still leads to an average of $232,000 per group.  Obviously groups don’t hold an equal share of the pie, so which groups are the big spenders?

Restore Our Future, a conservative Super PAC supporting Mitt Romney, is leading the pack in spending.  As of July 24 it has spent $53,878,098, most of which was in the form of attack ads against Obama and the other Republican presidential candidates.  Breakdown of its spending: 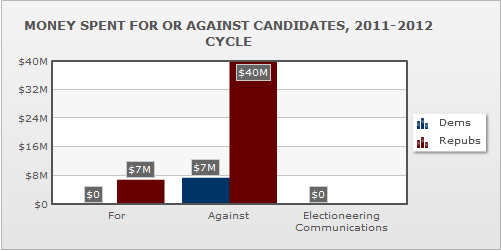 It’s bad enough that Restore our Future has currently spent a little over a quarter of all the group spending listed above.  What’s worse is the quality of the advertising this group is dishing out.  I would expect the “Doing Fine” video.  After all, what would a Super PAC do but jump on the blunders of its competition?  But then I see this video and I can’t help but shake my head.

Now, it wouldn’t be fair to pick solely on conservative Super PACs.  It would be easy though given this summary of the top Super PACs:

At about 8.3% of the total group money listed Obama’s leading Super PAC is by no means inconsequential.  In addition to a blog where every post begins with “Romney claims” or “Romney made (fill in something about being rich), Priorities USA has its own stellar video lineup.  With a handful of videos detailing stories of middle class workers who suffered at the hands of Bain Capital and a few pieces on outsourcing and other topics it was difficult to choose a video to relay.  But if you have the stomach and the stamina to make it to the end of their video list, you find this little beauty:

Campaign finance is simply too big to discuss in one blog post.  I would like to touch more on this issue in the coming weeks, but for now I will leave you with this.  If you haven’t seen the Colbert/Stewart Super PAC segments, you need to watch them.  Comedy? Yes.  Made to entertain?  Obviously.  Exercising Democracy?  Absolutely.